Thanks to this post I begin the writing of a new section of this blog, called Startup Corner.
In this category we will write about the development of our startup project: Iubenda, a legal generator (mainly privacy policies) for websites, that highly automates the generation process making it simple and painless.
We will also talk about everything that’s interesting when working on a startup, and what you’re about to read counts as the first example.

Iubenda will follow a Freemium Business Model and we are working hard to define the details of our future offer. Looking for Freemium services around the web, I tried to reach a deep understanding of how Freemium works, finding the most successful stories.

Many on the internet consider Freemium to be the business model able to save the web 2.0 from the terrible spiral of financially sustaining free websites.

Quoting Wikipedia, «Freemium is a business model that works by offering basic Web services, or a basic downloadable digital product, for free, while charging a premium for advanced or special features. The word “freemium” is created by combining the two aspects of the business model: “free” and “premium”.».

All started in March 2006, when Fred Wilson wrote a post called My Favorite Business Model in which he outlined the Freemium concept as it follows:

Give your service away for free, possibly ad supported but maybe not, acquire a lot of customers very efficiently through word of mouth, referral networks, organic search marketing, etc, then offer premium priced value added services or an enhanced version of your service to your customer base.

The term “Freemium” came from this comment, written by Jarid Lukin.

Fred Wilson made the rest and the word “Freemium” slowly became popular.

Before exposing the showcase, I would share with you what I consider the most useful articles about this argument.

I’m about to show what, in my opinion, are the best examples of Freemium web services, including a comment on each one based on my opinion. The order is random. 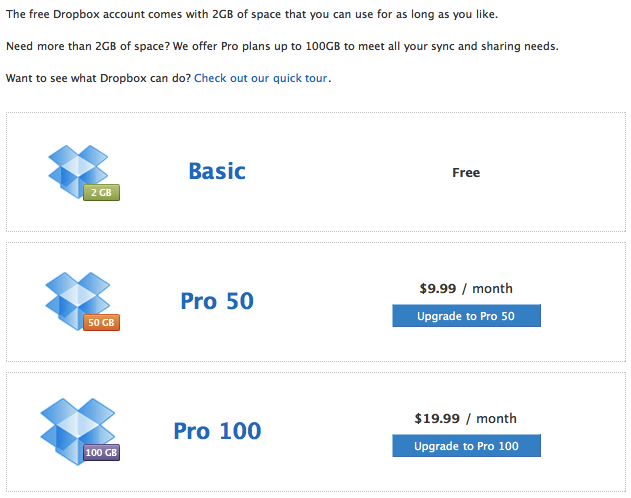 The offer provided by Dropbox is really clear and simple. They propose a differentiation based on a single dimension, leaving all the rest aside. They probably trust that their customers will always start from the free plan, then they’ll love the product and hopefully upgrade to Premium after reaching those first 2 GB.
The price is also really easy to justify to customers, because it’s based on something simple and perceptible.
Dropbox reached 4 Million users some time ago. 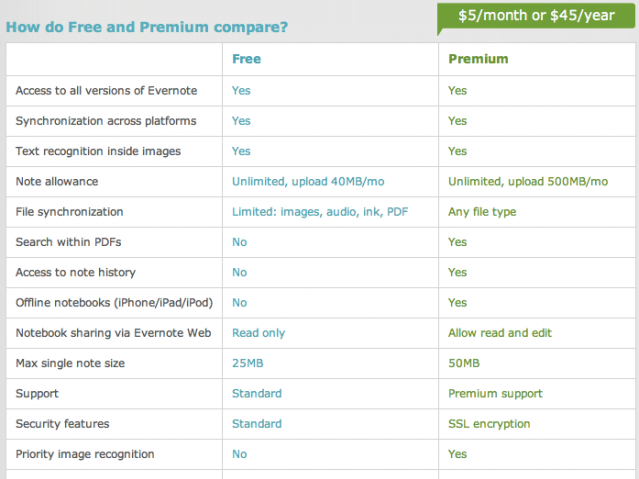 Evernote adds more complexity to the offer, compared to Dropbox, but the model is quite similar. Both Evernote and Dropbox try to lock their free users in the use of the product, forcing heavy ones to face the dilemma “pay or switch?”. This more complexity is probably consistent with the technological characteristics of the product and has a communicating role.
Unlike Dropbox’s GB, the uploadable MB/mo limit offered by Evernote is very difficult to calculate before using the product.
Once again I say: they have a great product and they rely on this, trusting that those among their users who find them good will switch to premium, looking for more.
Evernote has just reached 4 Million users. 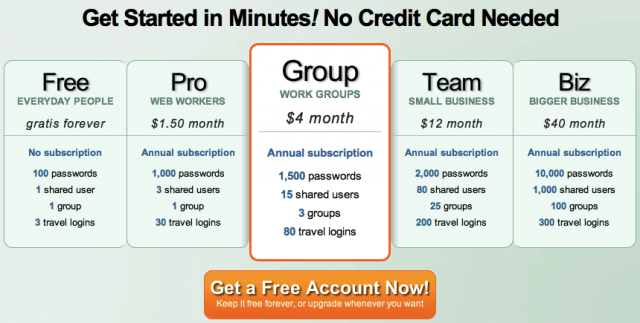 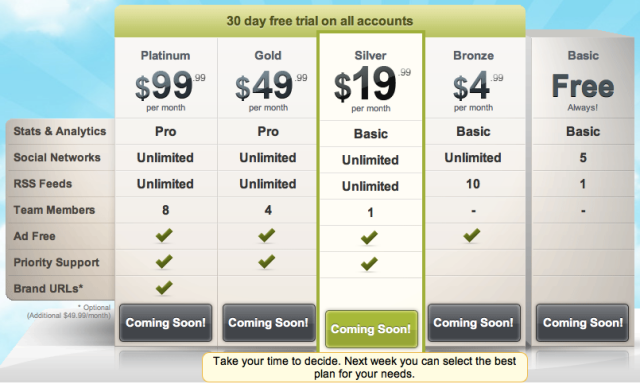 These three services have a really similar pricing structure.
They target business users, but they also dedicate a free and limited offer to singles wanting to try the product.
The differentiation in terms of features is somewhere between the simple and the complex. They chose a limited number of key features and focused on them.
Hootsuite can also be a great example of switching from free from freemium, transition that’s still in progress. It’s interesting to see how Hootsuite had to reconsider its first freemium proposal (the one you see in the image) publishing this post of clarifications. The most critical point was the number of team members, which raised the complaints of Hootsuite’s users.

I left Wufoo aside because I consider it as something great. Wufoo took something really trivial as web forms and made it a business by adding value and a bit of sane coolness.
I must underline those lovely plans’ names, taken from the Latin. 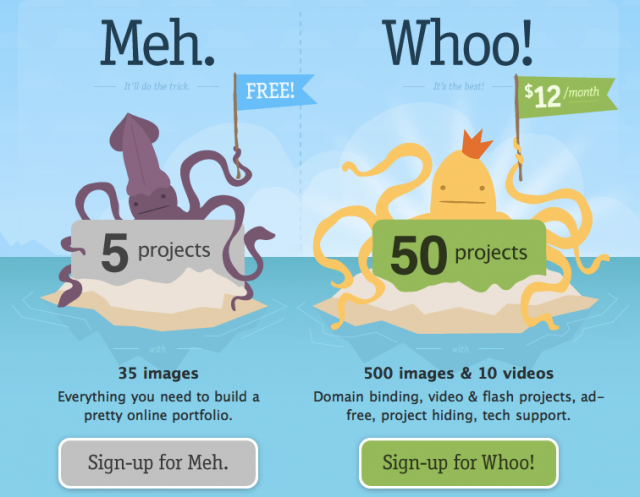 Carbonmade provides everything you need to build a pretty online portfolio and those 260000+ users surely makes it a success story.
As shown in the image, Carbonmade’s model understands (once again) the huge importance of locking the users into the product. They will need the premium plan when they’ll reach the imposed cap. The other features, like “video & flash projects”, are there to make the premium user even delighted.

In addition, I highly suggest this post about the freemium business model, written by one of the founders. I already mentioned it, I know, but it’s worth reading. 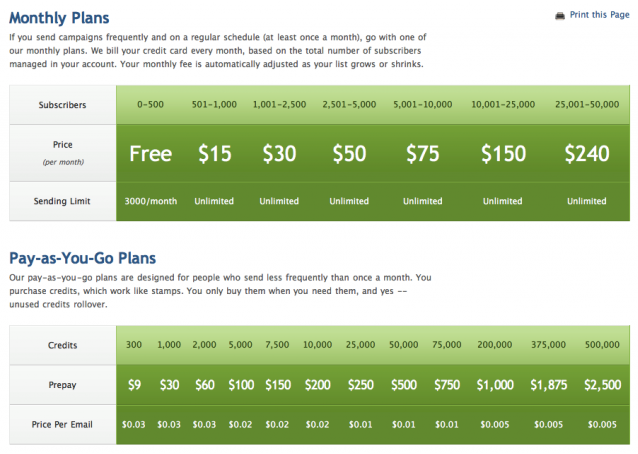 I like this example because it compares the different approaches of two competitors: MailChimp and CampaignMonitor both offer an email marketing web software.
What’s clear is that, mainly, MailChimp chooses complexity, while CampaignMonitor simplicity. But there’s more.
Each one of these two services have had the ability to differ from the other, offering the cheapest solution for a specific way and need of use.
It must me noted that MailChimp’s pay-as-you-go plan is an adjustment which clearly follows CampaignMonitor’s offer. 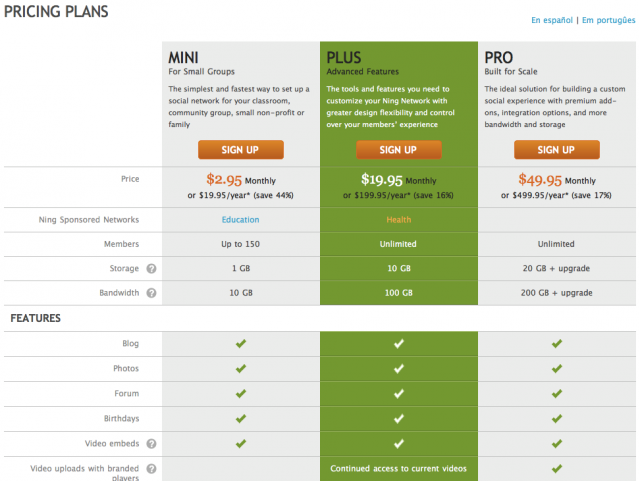 Ning is one of the biggest failures in the adoption of a Freemium business model and it must be mentioned because of this.
Recently, Ning switched to Premium after laying off 40% of its staff, the clear signal that not just something went wrong.
Their offer is now very similar to a common hosting provider, especially in terms of prices. 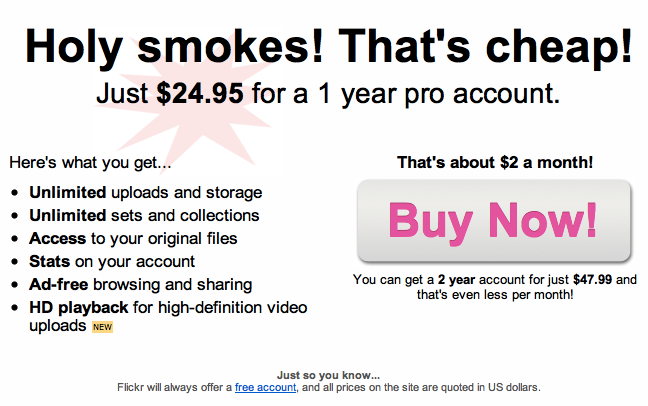 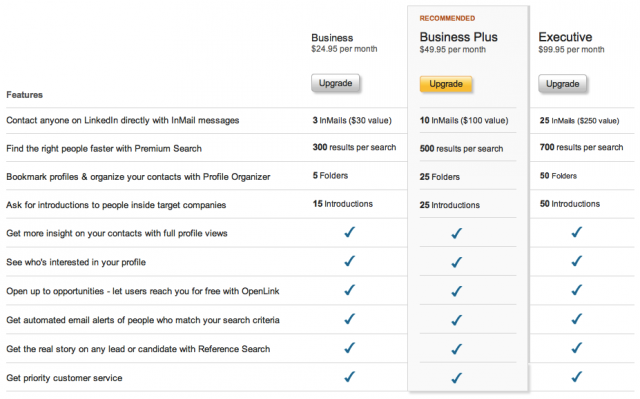 Skype, Flickr and Linkedin are the web businesses with the widest spreading among the ones adopting a Freemium model. They must appear every time you talk about this business model.
Seth Levine says «to be perfectly clear, I’m generally not a fan of the $19.99 entry price point for a product/service sold to business users. You can charge more. And you should.». Linkedin is made for business and consistently charges high prices. 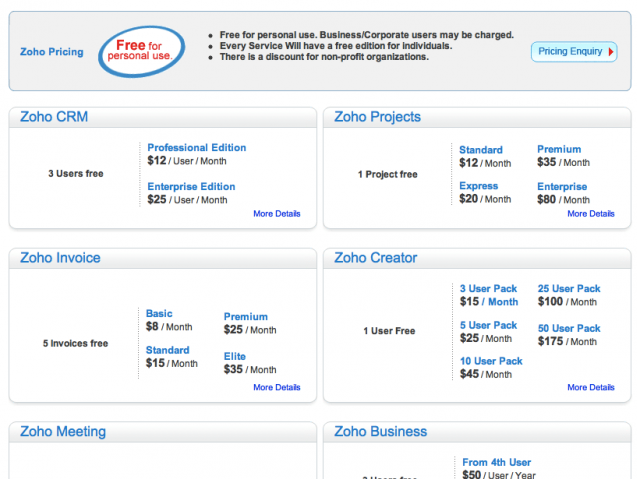 Zoho is a glaring example of confusing and complex pricing page.
How to avoid a terrible headache? Probably just switching to Google Docs.

Below some more noteworthy example of what I’ve just wrote about. 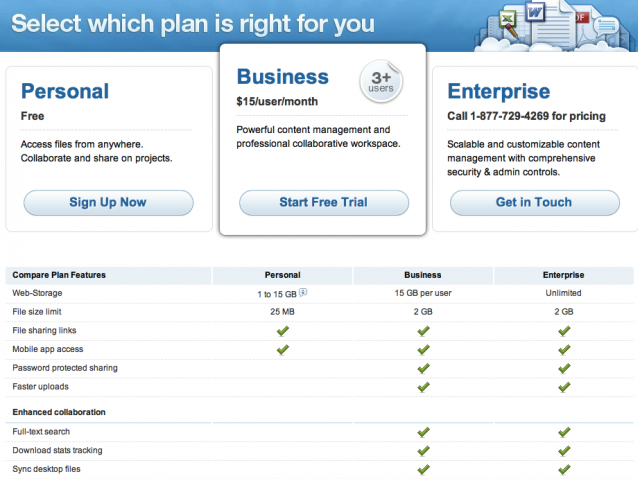 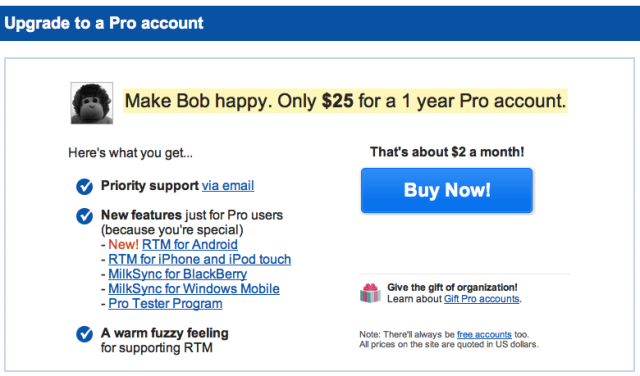 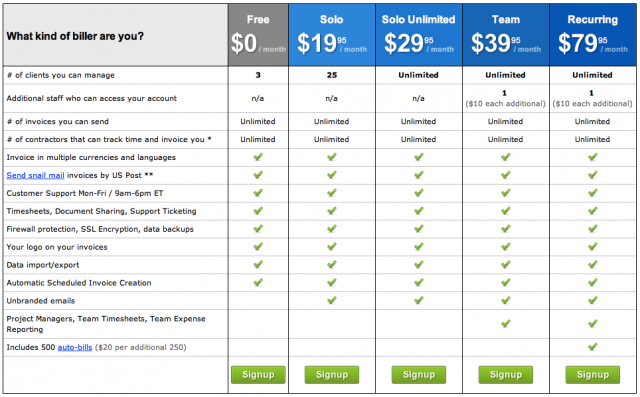 I hope that this article will be a point of reference for anyone interested in starting a web project with Freemium as business model, as indeed I am.
I plan to write again about this argument and the way I’ll implement Freemium on iubenda.
You can follow me and my startup project in the following ways:

Getting started with iubenda