Since the AG of California’s new focus on mobile apps and privacy we know that privacy is a huge issue on mobile apps. Your mobile phone provides access to location data, your address book or identity in general. Attorney General Kamala Harris therefore forged the agreement with six companies whose platforms comprise the majority of the mobile apps market: Amazon, Apple, Google, Hewlett-Packard, Microsoft and Research In Motion to get their app stores in line with California’s privacy regulations: mobile apps should have privacy policies to inform their users of their data collection practices.

A paper that was released a little earlier this year alongside an iOS app called “ProtectMyPrivacy: Detecting and Mitigating Privacy Leaks on iOS Devices Using Crowdsourcing” shows some numbers about apps on the App Store and how they access personal data: Access to the device identiﬁer UDID (48.4% of apps), location (13.2% of apps), address book (6.2% of apps) and music library (1.6% of apps) is widespread in iOS.

Apple had actually set a deadline for May 1 for applications to stop using that unique device ID – a 40-character long serial number appearing on iPhones (as well as iPads and iPod touches). This study by the a group at the University of California, San Diego suggests that nearly half of all iOS applications still use UDIDs in violation of Apple’s own very privacy policy.

Along with the study the group around Malcolm Hall and Yuvraj Agarwal designed an app called ProtectMyPrivacy and released a completely redesigned implementation of an earlier app that helps you protect your privacy on the iPhone. It provides a layer of security between apps and the operating system. When an app attempts to access any protected information, an alert is shown and you have the option to “Protect” or “Allow”.

The software is unique in that rather than merely blocking access to the information, which could cause the app to have unexpected behaviour or even crash, PMP instead supplies fake replacement information, such as randomized contact names, or a location specified by you. You can quickly switch between real and fake information, even while the app is running. PMP also provides automatic protection using crowd-sourced recommendations, this uses information from previous manual decisions made by other users for the same app. 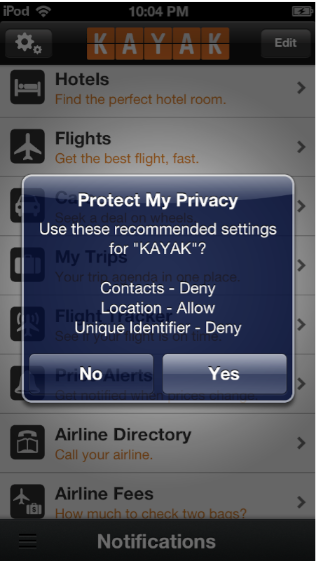 It’s not much of a surprise that PMP isn’t really available on the App Store as of now, you may however use it on jailbroken phones for the time being. We applaud the efforts to return privacy into our pockets. If you need a privacy policy to go along with your app, we may just have the right solution for you: use our privacy policy generator for mobile apps.

Getting started with iubenda